Three CEDAT-URV researchers have participated in the 13th Colloquium of the Academy of Environmental Law of the IUCN, which was held from 7 to 12 September 2015 at Atma Jaya Catholic University of Jakarta (Indonesia). This time, the symposium has focused on the analysis of forests and marine biodiversity. In the framework of the different presentations by the CEDAT, Professor Jaria presented the paper entitled "Forest Conservation in Spain: Between Planning and Abandonment"; Marquès professor on "Illegal Logging Illegal Timber Trade and Criminal Law in Europe: Getting the Whole Picture" and professor Borràs on "Land Rights in an Era of Land Grabs". Professor Marques has coordinated and moderated the "Teaching Worshop" dedicated to "Good Practices in the Teaching and Learning of Environmental Law".

Last year was honored CEDAT sponsored, from June 30 to July 5, 2014, the 12th Symposium of the Academy of Environmental Law of the IUCN, entitled "Energy for a Fair Society in a Safe Planet". For one week, more than 300 specialists in environmental law than forty countries presented their scientific works and participated in discussions of the various sessions and workshops, Campus Catalunya of the Rovira i Virgili University. The event was a success from every point of view and allowed to consolidate the URV and CEDAT as a benchmark of environmental law worldwide. 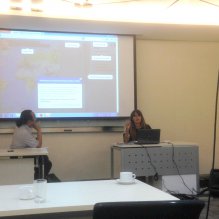